On 16 November, 2011 I flew to the Philippines with Elders Dan Brotherton and Roger Graybill of Asia and Australia International Ministries (AAIM) and Elder Michael Prater. The major purpose for our visit was to conduct the second Philippine National Conference. In addition, there were many souls who were waiting to be baptized. Travel at times was hazardous on rain slick roads. Over 400 members and nonmembers attended the conference and new by-laws were approved by the members, which should allow for further development of the church. The remainder of our busy schedule (Roger, Mike, and I returned to KC on 2 December) involved teaching and baptizing and confirming many new members into the Church. On one particular day, Dan and Mike baptized 127 new members and we confirmed them in a 4 1/2 hour service that evening! Needless to say, much of our time commitment was centered around helping the new sheep to understand the serious covenant they were making with Jesus Christ. Much follow-up ministry is needed. 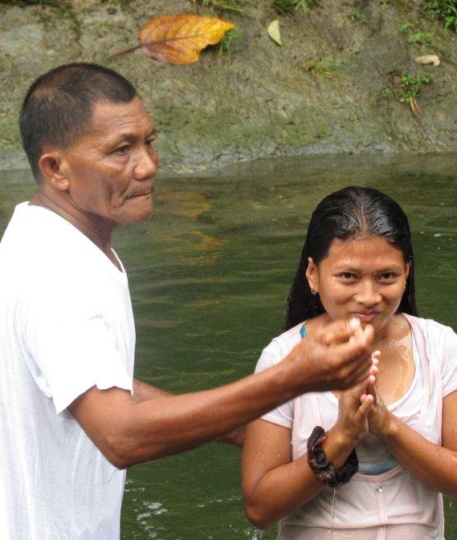 This was the third trip for me and the rapid church growth in that land is astounding. The efforts of our missionary minded priests is notable. We did organize one new Restoration branch and there are now five branches and ten missions on one island alone. Of these saints, many shall be gathered to Zion.

As this is a new (3 years) missionary effort there are some concerns which I would like to address. Two men from the newly formed SEAAM (Conference of Restoration Elders) preceded our visit, Elder Steve Mapes and High Priest Paul Gage, two more attended the Conference, Seventy Richard Neill and Elder Jack Hagensen. As there are 7,100 islands in the Philippines, redundancy by competing groups has the serious potential of leading to confusion and division, especially if representatives of SEAAM unwisely begin ordaining priesthood who may have a future calling but are not spiritually mature enough yet. A “fact” sheet handed out by two men from SEAAM (Elder Steve Mapes and High Priest Paul Gage) mis represented the CRE to the Philippine saints as being supported by 100’s of Restoration branches. As no group can make such a claim with accurate supporting evidence, we found this to be not only perplexing but not worthy of the men of the ministry. We pointed this out to Richard Neill, of the SEAAM board who stated he was not aware of the sheet which was distributed by two members of the board of which he is chairman. There were other statements on the fact sheet which were simply not true as well, or misleading in their emphasis.

We are very concerned that the church is outgrowing the available number of Philippine ministers who have sufficient understanding of the Restoration gospel. They are hindered by a lack of the three books of scripture in their own tongue, an income level which causes them to be more dependent on American resources, and their own immaturity in the gospel. Only time can correct these issues, and a United States ministry which proceeds with wisdom.

Although there were those in our leadership training on the Tuesday before we departed who wanted to choose between AAlM and SEAAM, we counseled against such a vote as we are trying to preserve unity among the brothers and sisters. At this point I can see no reason for SEAAM to be involved in this work as the men of AAIM are offering the leadership needed. It is sad to me that the one thing we have been good at in the Restoration is exporting the same types of problems to other lands which are extant in the Center Place. Men who hinder rather than help the Lord must give an account to Him. Pray for the saints that they will be discerning and abide in Christ.

This site is geared toward updating the Saints on the mission activities in the Philippines, Taiwan, and Australia.